Uh-Oh is the second digital single album by South Korean girl group (G)I-DLE. It was released digitally on June 26, 2019 along with a music video for the song.

(G)I-DLE is back with a new single, 'Uh-Oh'. The keyword of the song, Uh-Oh, is an expression commonly used in an embarassing situation. In this song, the girls used this expression to diss people trying to be a friend with them after their ignorance on their first meet.

The Newtro Boom Bap track is produced by SOYEON, the leader and the producer of the group's three lead singles: 'LATATA', 'HANN', 'Senorita'. It is rare for a girl group to attempt Boom Bap and with this attempt, the girl group will introduce the '90s culture to new generation while allowing the rest of the generations to reminiscent on their past.

The blunt old-school drum will first make you bop your head. Then it comes the sounds of strong bass, clean piano, string, and analog Synth. Most importantly, the producer tried to keep the cool of the old school Hip-Hop by inserting scratching sound using all members' voice.

(G)I-DLE's fresh new attempt is also shown visually. The music video captured the strong and retro vibe of the song by shooting classic car and dirt filled Earthy Mountain in low angle. The viewers of the video will also meet the girls' dressed and styled in '90s fashion. The director of the video, DIGIPEDI's WONMO SEONG created a video in a style of Hip-Hop artists rather than a typical girl group's. Performing in crowds of Girl crew, bikers and people was his attempt to provide the image of provocation and progessiveness.

(G)I-DLE is breaking out from their comfort song with 'Uh Oh', revamping their unique identity with this straight forward Boom Bap sound. If you liked their previous singles 'LATATA', 'HANN', and 'Senorita', this new attempt in Hip-Hop will blow you away in a new way. [1]

Hey
There’s someone trying to be close to me
Ya, I’m talking about you

According to Allkpop, "I love how this one plays out. Each girl has their own take on the self-empowerment thing, as they belt out the lyrics. The song has some nods to hip-hop but in a much more traditional pop format. Though the staccato nature of the verses actually gives it that punch that it might otherwise be lacking. I love the bridge on this one and the dance break. The attitude they pour into this one is awe-inspiring, and they sound like they're poised to take on the world.

This one has less of a hip-hop vibe than their other songs, despite the intro. Soyeon's rapping was a lot less cool and more sing-songy than the rogue beat she rode on their previous title track. There is, however, an upside: Shuhua got more lines this time round (or at least, it sure seemed like it). This tune is just as fantastic as any of the other songs they've graced us with. It's a serious bop.

They always have, really, from the awkward cheapness of "La Ta Ta" to their newest one. They're not terrible, but in some cases, it just looks like Cube didn't want to spend the money to promote the band properly. Then again, it is Cube, and they have an uneven history when it comes to MVs.

The girls are singing, rapping, and striking poses in a variety of locations, including a body shop, a club, and the desert. They start out focusing on the girls outside a strip mall in LA, which kinda screams low-rent. But on the other hand, the cycles help highlight the message of the song, or at least the intent behind it. Motorbikes are emblematic of the devil-may-care independence they're singing about. They do this quite well, telling haters how it's gonna be as they trip from set to set.

This MV isn't bad, though, and it makes up for the standard tropes it embraces with solid photography, colors that pop, and the tons of attitude the band's music evokes. Not to mention the girls, and a shockingly light blonde Soyeon.

Maybe it's because I enjoy the song so much, but I have to say that I like this MV." [2] 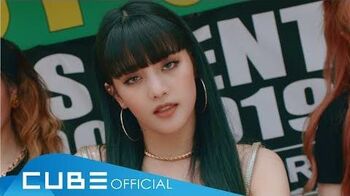 Retrieved from "https://g-idle.fandom.com/wiki/Uh-Oh?oldid=7562"
Community content is available under CC-BY-SA unless otherwise noted.