Soyeon (소연) also known as Jeon So Yeon (전소연) is a South Korean singer-songwriter, rapper, and producer under Cube Entertainment. She is the leader, main rapper, vocalist and center of South Korean girl group (G)I-DLE.

Soyeon was born on August 26, 1998 at Samsun hospital. When she was still a toddler, she couldn't fit in at the daycare, so she ended up being homeschooled. At home, she enjoyed dancing and singing, which became a foundation for her music career. She also enjoyed watching anime, and dreamed of becoming a ninja and a pirate after watching Naruto and One Piece. For period of time, she made sure to carry with her ninja weapons that sold from the stationary store. She entered Kuryong Elementary School and started studying ballet. She entered and won numerous ballet competitions in her 3rd year of elementary school, but decided to quit ballet to pursue a music career after seeing Big Bang perform.

She went 20-30 auditions when she was in elementary school without anyone knowing. She did not pass any of the auditions. She felt that she needed a new change and came to the path of rapping. She gathered the courage to rap at auditions, which earned her calls from several places. She did not accept any of the offers because their directions in music were different from hers. As a result, she let go of her dream of becoming a singer and decided to pick up dancing again. She became a street dancer, but decided to audition once again after seeing Cube Entertainment's 2014 audition poster. The audition period in Seoul was over, so she went to Incheon to audition and became a trainee.

In January 2016, Soyeon appeared as a representative trainee for Cube Entertainment on the first episode of the girl group survival show, Produce 101. She remained a popular contestant throughout the show, peaking at 10th place on the 5th episode. However she ranked at number 20 on the last episode and failed to become a member of the winning girl group, I.O.I.

In July 2016, Soyeon appeared as a contestant in the third season of the rap competition show, Unpretty Rapstar. The show finished with Soyeon as 2nd runner-up. She also gained three tracks on the show's final compilation album.

On December 29, 2016, Soyeon signed an exclusive contract as an artist under Cube Entertainment. She officially debuted as a solo-singer on November 5, 2017 with the digital singles "Jelly" and "Idle Song". It was speculated that Cube Entertainment already had plans of (G)I-DLE at this time, hence the title of the second single.

On January 11, 2018, it was announced that Soyeon would be re-debuting in Cube Entertainment's new girl group called (G)I-DLE as the group's leader and main rapper.

On August 8, 2018, it was announced that Soyeon will participate in a girl-group collaboration project called Station Young for SM Station's X 0 alongside Red Velvet's Seulgi, Kim Chung-ha and GFriend's SinB.

On November 3, 2018, Soyeon and Miyeon collaborated with American artists Jaira Burns and Madison Beer to perform "Pop/Stars" at the 2018 League of Legends World Championship. This collaboration project, named "K/DA," was formulated by Riot Games in February of the same year. Soyeon plays the role of "Akali" in the group, which is a character in the League of Legends videogame. The single release of the song "Pop/Stars" reached number one on Billboard's World Digital Songs chart.

On November 10 2019, newly formed group "True Damage" debuted with the music video for "GIANTS" released. It was a collaboration between Soyeon, Becky G, Keke Palmer, DUCKWRTH, and Thutmose.

The song is a multilingual track performed predominantly in English, with verses in Spanish and Korean. On the same day, the group performed at the 2019 League of Legends World Championship finals in Paris, France. It was Soyeon's second year in a row to perform at the opening ceremony of the World Championship finals. "Giants" debuted at number fifteen and nineteen at Billboard's Rap and R&B/Hip hop Digital Songs Sales charts, respectively.

In 2020, Soyeon made her appearance on Mnet new Hip Hop inspired Do You Know Hip Hop. The show features rappers who promoted from the late 1990s-2000s and pioneered the hip hop genre in Korea and a guest that have an undying enthusiasm for hip hop. On February 28, she appeared as one of the "young rappers" to collaborate with Double K and Nuck performing "2020 Lion remix" for Old & Young collaboration stage. In April, (G)I-dle released their third EP, I Trust. All of the songs on the album, including the lead single "Oh My God" was written and composed by Soyeon and longtime collaborator Yummy Tone. The song was released in two languages: English and Korean. On July 22, Soyeon featured on DJ Hyo's track "Dessert" with rapper Loopy. The song is a jungle pop genre with bouncy beat and catchy moombahton rhythm, clever and memorable hook that uses various synthesizer, claps and whistles with message of wanting a sweet love rather than difficult and complex and is expressed with dessert. In an interview with Melon, DJ Hyo revealed the reason she chose Soyeon is because "she is an exceptionally talented person in many ways, so I wanted to do the collab together with her". Soyeon took part in writing and composing the song. In August, Soyeon composed the group's first summer song "Dumdi Dumdi" alongside Pop Time, who has produced many of Zico and Block B's hit songs.

On August 27, 2020, she reprised her role as League of Legends character Akali in "The Baddest" and "More", on K/DA's All Out (EP). Soyeon took part in producing Apink's Namjoo solo debut song "Bird", which will be released on September 7. On December 16, it was confirmed that Jeon, Pentagon's Hui, and AB6IX's Lee Dae-hwi would be producing songs for the Top 7 competition on Mnet's audition show CAP-TEEN. 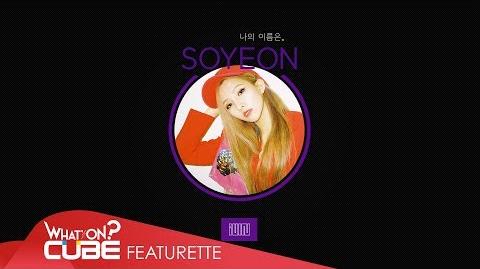 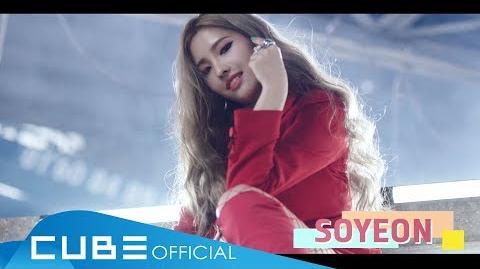 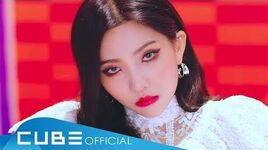 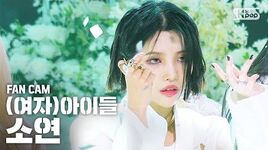 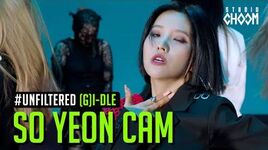 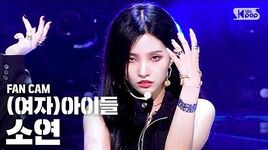