Soojin (수진) also known as Seo Soo Jin (서수진) is a South Korean singer under Cube Entertainment. She is the main dancer and vocalist of the South Korean girl group (G)I-DLE.

With the advice of her mother, Soojin learned jazz dance at a young age. She found that she really liked to dance and so thought of becoming a singer ever since she was young. However, she later went onto the path of taekwondo. She found taekwondo fun and even thought of becoming a taekwondo at one point, however as time passed, she realized that she is more interested in continuing learning to dance. She began attending a dance academy and then later as she became interested in singing, she also went to attend a vocal academy. However, she faced an obstacle to achieving her dreams: her father highly disapproved of becoming a singer. She pleaded with her father for 2 years from the age of 13 until she was 15 before he finally gave in to her sincerity and allowed her to pursue her dreams.

Soojin was extremely shy at the beginning, to the point she hovered at the entrance of the practice room for awhile on the first day of class. However, with the help of her teacher she began to adjust at the academy. Apart from singing, she was able to learn a lot from her friends who took the same classes as her. While learning, she found it fascinating to listen her own voice. She also found that the more she sang, the more she wanted to put more effort into improving. With her chosen path, it was natural that she began preparing to enter an arts high school and was later proudly accepted into a Korean Arts High School. At her new school, she improved her dance skills through doing performances, events and practical examinations, she even joined a dance team. As time passed, just before her third year of high school, she received an offer from Cube Entertainment for an audition. At first, she felt more afraid than happy, but after taking time to consider the offer and thinking of it as a challenge, she decided to go to the audition. After a few auditions, she was accepted and began her trainee life with Cube Entertainment in 2016.

At some unknown time, Soojin was a trainee under DN Entertainment. She was originally supposed to be a member of the then-upcoming South Korean girl group VIVIDIVA under the stage name N.Na (앤나), but withdrew from the group sometime in 2015 before it debuted.

Three years later, she was then revealed on Twitter as an upcoming member of (G)I-DLE on April 10, 2018 and debuted as an official member on May 2, 2018, following the release of the group's first mini album, I am.

In October 2020, Glance TV introduced their new fashion show Minnie Soojin's i'M THE TREND (민니 수진의 i'M THE TREND) and paired Soojin and Minnie together. The duo will have a styling battle every time for the title of 'Trend Center', which is a combination of a trend setter and an idol center. In addition, the duo will revealed their styling secrets, various outfits, shopping tips and video pictorial 'Fashion Film'. The show premiered on October 14 through Naver Style TV.

On 22 October 2020, according to Cube Entertainment, Soojin was examined and treated at the hospital for a sprained ankle which she sustained during choreography practice. Soojin visited the hospital for examination and treatment. The agency said, "As a result of the examination by the medical staff, the ankle ligament has increased, and according to the opinion of the medical staff to wear a cast and protector until recovery, we will live with minimal movement for the time being and is unable to participate in the group's upcoming schedules, including '2020 LIVE in DMZ' on 23 October and '2020 K-Culture Festival' on 24 October.

On 4 March 2021, it was announced that Soojin would be taking a temporary hiatus from (G)I-DLE following school bullying accusations. 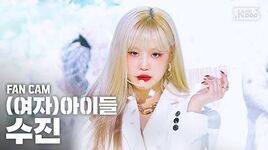 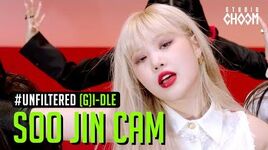 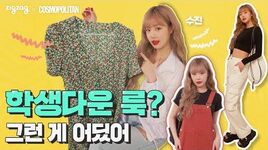 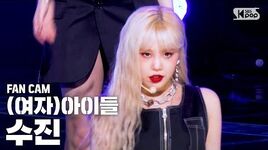 Retrieved from "https://g-idle.fandom.com/wiki/Soojin?oldid=10203"
Community content is available under CC-BY-SA unless otherwise noted.