League of Legends; by ‎Riot Games

'K/DA is a virtual music girl group consisting of four themed versions of League of Legends characters Ahri, Akali, Evelynn and Kai'Sa. Evelynn and Kai'Sa are voiced by American singers Madison Beer and Jaira Burns respectively, while Ahri and Akali are voiced by (G)I-dle members Miyeon and Soyeon. K/DA was developed by Riot Games, the company behind League of Legends, and unveiled at the 2018 League of Legends World Championship with an augmented reality live performance of their first and only song, "Pop/Stars". A music video of the song uploaded to YouTube subsequently went viral, surpassing 100 million views in one month, and reaching over 250 million views, as well as topping Billboards World Digital Song Sales chart.

The conception of K/DA was based on Riot's expressed desire to create more musical content in the future, with the characters chosen based on K-pop archetypes. The band was created to promote the League World Championship and to sell in-game K/DA skins of the characters in League of Legends. K/DA has subsequently achieved significant popularity both within and beyond that of the League of Legends fandom, and has received critical acclaim, especially with regards to their performance during the World Championship and the impact of gaming on the music scene.

K/DA was unveiled in the 2018 League of Legends World Championship Opening Ceremony in Incheon on November 3, 2018, with the release of their debut single (and so far only song), "POP/STARS". It is a bilingual song with both K-pop and American pop influences, featuring vocals in English by Beer and Burns, and in both English and Korean by Soyeon and Miyeon. During the ceremony, Beer, Burns, Miyeon and Soyeon performed "Pop/Stars" on-stage, whilst augmented reality versions of the characters they voice sang and danced alongside them. According to Viranda Tantula, a creative lead at Riot, this was chosen because "[they] believe[d] it’s the balance of the human and virtual elements in the real world performance setting that makes for the most visceral experience for the audience member." The augmented reality versions of the characters could perform acts a human could not achieve, such as Ahri flying onto the stage, whilst a human singer has "a certain raw human element" that can't yet be captured by a virtual performer.

According to Sebastien Najand, who composed "Pop/Stars", an all-English was trialled at first, followed by a version with significantly more Korean. Ultimately, Najand said that "we wanted to make it a blend of western pop and K-Pop", as opposed to a situation "where it’s mostly [just] Korean with some English sprinkled in." Patrick Morales, the creative lead behind the "Pop/Stars" music video, said that he wanted K/DA to exist "somewhere between fantasy and reality". An example of this was the scene featuring Akali in the video, which would be a context that would not make sense in the fantasy world of League, but is appropriate for the setting of the music video. Similar to this, the CGI of the video juxtaposes a cartoon-like, illustrative look of the K/DA characters against a more realistic background. The team was initially uncertain of the type of music that would be most suitable for the group, due to amount of variety within the pop music genre. They eventually decided against a cuter, more-idol group based theme in favour of something "modern and edgy" that combines a "bit of street style with a handcrafted feel."

In League of Legends Edit

K/DA of Ahri, Akali, Evelynn and Kai'Sa, depicting the characters as how they appear in the band, are available for purchase in League of Legends. Skins in the game are for cosmetic purposes only, and cost around ten dollars to purchase. "Prestige" K/DA skins also exist in the game, including a Prestige Kai'Sa skin which replaces her dark purple features for a bright white and yellow. Akali later also received a Prestige skin that features black and gold details instead of the usual blue and hot pink. The Prestige skins are only available by completing special missions in-game. The popularity of K/DA has lead Riot to confirm that additional K/DA content would be introduced to League in 2019.

The name "K/DA" is an in-game term in League of Legends that refers to a player's kills, deaths, and assists. The creation of K/DA was based in part on the desire of Riot Games, League's developers to "see their company more as a full-fledged music label in the future". Although the initial pitch to create K/DA came sometime in 2017, according to Tantula, the idea behind it "had been brewing for about five years." Riot had been wanting to create a "League of Legends version of Gorillaz" that would "be a band of characters with music provided by musicians pulled together by Riot." Toa Dunn, head of Riot's music division, claimed in an interview with Variety that "[K/DA] was the most involved music project we’ve ever done."

According to Tantula, "We believe there’s a huge overlap between League of Legends, esports overall and the music industry", and as a result, they invested "in building [their] internal music team with both an artist focused creative studio full of composers, songwriters and producers, as well as people who can perform all the services that you would see at a standard music label, such as distribution, A&R and promo." Riot had previously ventured into musical acts, although these attempts were based upon CGI video. This includes "Pentakill", a virtual metal band featuring other League characters Yorick, Mordekaiser, Sona, Karthus, and Olaf, which debuted in 2011. On June 21, 2014, Pentakill's Smite and Ignite album debuted and peaked at tenth on Billboard's Hard Rock Albums chart.

Patrick Morales (creative lead behind the Pop/Stars music video), Janelle Jimenez (the lead designer behind the K/DA skins) and Toa Dunn (the head of the Riot Music Group) were the main creators of K/DA. The dances were choreographed by Ellen Kim, Bailey Sok, Stevie Doré and Eileen Harman. 4Minute also served as a source of inspiration behind K/DA, especially their more "hard hitting" songs opposed to others that were "too nice and bubbly". After Pop/Stars was written, the team behind K/DA began looking for singers to voice the song and its characters. Madison Beer was brought on early, as they "had been talking to [her] for a year about other projects", and Jaira Burns after. Subsequently, the team began turning to South Korea, with Tantula recalling that he "started taking trips to Korea" and "meeting with all of the Korean entertainment groups". As many at Riot were fans of (G)I-dle and liked "the attitude they brought to the song, especially the rap section", Miyeon and Soyeon were brought on as well.

The members of K/DA consist of four characters from the League of Legends video game:

The characters were chosen from League's character list based on whether players would realistically see them as "Pop Stars". According to Patrick Morales, Ahri was the first character to be chosen for K/DA, due to her previous appearances in League-related music as "Pop Star Ahri" back in 2013. Subsequently, with Ahri being a "beautiful, charming leader"-type character, Evelynn was chosen to contrast to that, by "being the wild and provocative diva of the group". As Akali's character was being reworked at the time, Morales included her into the band as he liked the "rebellious spirit" of the character. Kai'Sa was included due to a recommendation from skins lead Janelle Jimenez, as she wanted a "strong but silent loner who expressed herself on stage through her movements".

The team also wanted diversity in the characters chosen, where each character has a well-defined archetype that allows viewers to easily identify their favourite K/DA member. According to Jimenez, "Pop groups tend to have a formula where each member has their own unique personality and style. I approached this like looking at classic anime team where you have the leader, the shy one, the feisty one, etc." Furthermore, they also wanted to ensure that the characters chosen had differing roles in the game. Pop/Stars was written with these archetypes in mind. For example, a rap section was included in the song as Akali was envisioned to be the rapper, and the pre-chorus was designed to be sung by Ahri. Pop/Stars also aimed to ensure that all the K/DA members were represented in a way befitting their personality and role within the band. 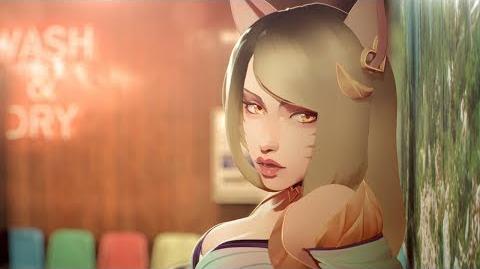 Retrieved from "https://g-idle.fandom.com/wiki/KDA?oldid=8521"
Community content is available under CC-BY-SA unless otherwise noted.