I am is the debut mini album by South Korean girl group (G)I-DLE. It was released digitally on May 2, 2018 and physically on May 3, 2018 along with a music video for the lead single, "LATATA".

Cube Entertainment presents a six-piece multinational girl group, (G)I-DLE. The hottest new girl group of 2018 formed wiyh members from different nationality. The group is led by SOYEON JEON, a talented rapper who made appearances in highly popular television shows such as M.net's 'Produce 101' and 'Unpretty Rapstar'. Alongside SOYEON, MIYEON, SOOJIN, YUQI, SHUHUA, and MINNIE from the six-piece girl group. With the group's pre-debut marketing contents gone viral, fans' anticipation for (G)I-DLE debut built up to Its maximum rate.

With their unique styles and charms, (G)I-DLE differentiates themselves from the rest of their competitors. The title of the E.P., [I am], has been particularly chosen; the meaning behind it is introduce (G)I-DLE and its members to the music scene. This specific E.P. is consists of six tracks, including the lead single 'LATATA'.

The lead single 'LATATA' is a Moobahton trap track; a perfect match to show off (G)I-DLE's bold and powerful performance. The six members will turn into dancers who who would dance for their lovers. One notable fact about this upbeat track that it is written by SOYEON JEON and it has received the most views during the blind listening session. What makes the track more unique is the fact that it is very rare for a girl group to have their self-written song to become their own debut single. In addition, (G)I-DLE's modern uniqueness is represented through colours and art pieces in their music video; Ethnic artwork mix-matched with yellow and neon lights.

Second track of the E.P. "$$$" is a confident boosting anthem singing about no afraid of one's confident attitude. In track no. 3, "MAZE", (G)I-DLE expressed confused feeling about love through dynamic guitar riff and synth on euphoric beats. In track no. 4 "DON'T TEXT ME", the girls cut off their emotions and all of their ex's texts on chill trap beats. Fifth track of the E.P. "What's In Your House?", is an addictive track singing aboit a girl who fell in love. The album concludes with "Hear Me" witha subtle impact.

From Moobahton to Ballad, (G)I-DLE's E.P. embraces various music spectrum whic is very rare to be seen in a girl group's very first album. (G)I-DLE definitely possess all the right elements of a girl group to have. Fans can't wait to take a part in (G)I-DLE's exciting journey to success.

Just like the title of the first E.P., [I am] is an album to express who "I" am as individuals and as a girl group! SOYEON JEON puts her best efforts writing the lead single 'LATATA', she assigned each part of the song to a specific member so all can stand out on their parts! We hope you enjoy the musically unique album!"[1]

According to Allkpop, "CUBE has debuted their newest girl group, (G)I-DLE! There are 6 girls in all: Miyeon, Minnie, Soojin, Soyeon, Yuqi, and Shuhua. If Soyeon looks and sounds familiar, she is a veteran of both "Produce 101" and "Unpretty Rapstar", not to mention she released her hit single "Jelly." Her history in the business is already well-established. This is exciting for CUBE fans as the last time they debuted a girl group was in 2015 with CLC.

Chock-full of interesting hooks against R&B melodies, "LATATA" picks up especially during the chorus, where an army of girls is proclaiming boldly. The power of the beat and the in-your-face attitude is what makes this song work so well. The hip-hop track "$$$" starts out with Soyeon's singular style, and layers attitude over a bit of cuteness in the chorus. They don't skimp on the hooks, though, giving it an explosive beat. This is a playful tune, and every bit as good as the title track.

The next song, "MAZE," kind of continues the club-banger vibe, and I got some EXID vibes from this one (that's meant as a compliment, BTW). I just heard some similarities, and it hit me in the bias bone. Love Love Love the belted chorus here and the way she turns the tables on the guy after the bridge. A fantastic jam and probably the best on the entire EP. "DON'T TEXT ME" is some smooth R&B. They harmonize extremely well, and I like how you can pick out the girls' voices here. The synth washes just contribute to this awesome package. It's a nice comedown after the bangers.

The R&B dance track "What's In Your House?" is just as smooth as "DON'T TEXT ME," but in a different way. The harmonies are higher and in some ways tighter. The hook is beautifully repetitive and goes perfectly with the rest of it. And just when you're grooving to it, along comes Soyeon to spit some sweet rhymes. "Hear Me" is an emotional ballad. It's also very different than the entire rest of the EP. It's got orchestral strings, and a piano and they work these well. There are awesome orchestral flourishes during the piece that just heightens the interest. Not all the vocals are under control, although the flaws do lend a raw authenticity to the piece. Props to them for not falling into the typical ballad trap -- they don't try to drown out the singer at the end.

I think this group is angling for the girl crush concept. Those are the girl groups I love, and frankly, we need more of them, with the field being divided between cute and sexy. I want fierce, and this band delivers. Soyeon handles her parts really well, particularly on "$$$." On track 2, her machine gun raps are astonishing. The timbre of her rapping is nothing we haven't heard before in everything from AOA to Blackpink, but it's her flow I'm most intrigued by. It grabs you by the collar and demands "pay attention to me!" This is a strong debut, and I can't wait to hear more from these talented ladies. Not crazy about the name, but hey, they didn't ask me."[2] 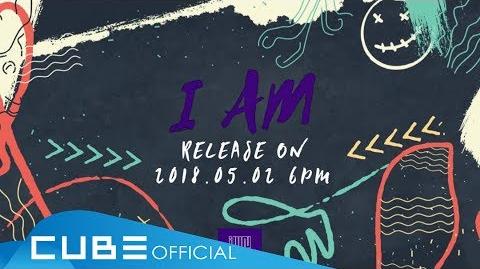 Retrieved from "https://g-idle.fandom.com/wiki/I_am?oldid=7411"
Community content is available under CC-BY-SA unless otherwise noted.